I Wouldn't Have Guessed This 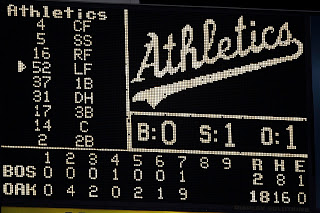 Simply stated the Red Sox got their asses kicked in Oakland this past weekend. The numbers surrounding it are butt ugly: outscored 33-5, they are 0-6 on the 9-game West Coast swing, and it was the first time the Red Sox have lost eight straight to the A's in a season since 1932, which also happens to be the worst season in Red Sox history: 43-111.

Getting outscored 33-5 was the biggest margin the Sox have been outscored in a three-game series in their history. The pitching has been simply atrocious (ERA over 9.00) and the bats silent (.231 on the trip). All the hallmarks of a team mailing it in.

Now, Ben Cherington and John Henry have joined the team in Seattle. Their presence has been downplayed, but you just know another crappy performance in this three-game series with the Mariners may mean that Bobby Valentine won't make it back to Boston alive.

Why bother waiting? Do everyone, including Valentine a favor, and put an end to this misery right now.
Posted by The Omnipotent Q at 12:22 PM