26 Days Until The Agony Ends 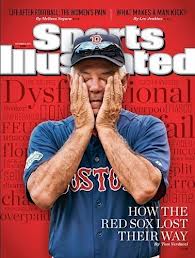 I'm guessing that EVERY MLB manager has wanted to punch out some reporter (or ten) in his career after being asked a really stupid question.

But Bobby Valentine, who is setting new records for embarrassing Red Sox fans, said it out loud to WEEI's Glenn Ordway the other day during a telephone interview on his radio show.

Valentine has no edit button and just blurts out nonsense like this. Listen, I understand this has been a very trying year for Valentine, on all fronts. The vultures are circling, and he knows it. And there are times when Boston media deserves a collective belt in the mouth.

The incident reminds me of those classic press conferences that Bill Parcells had when he was coaching the New York Giants. Someone would ask something really inane, and Parcells would just look at the guy and say, "That's a stupid question" and move to the next guy.

If Valentine was really joking, he should have just laughed off Ordway's question about whether or not he had "checked out" and said, "Of course not. Next question."

And once again for the 4,387th time in 2012, something incredibly stupid gets blown out of proportion. Larry Lucchino knew that Valentine was a drama queen (or is that "drama king?") when he hired him. (And make no mistake, Lucchino was the one who wanted him. It makes me wonder how this season would have gone if Ben Cherington got the man he wanted, Dale Sveum, as manager.)

As I've written before, I have never used the word "embarrassing" more than I have about the Red Sox than I have in 2012. No, not everything is Valentine's fault, but is Bobby V part of the problem, or the solution? That answer should be obvious. Like just about every other Red Sox fan out there, I am just sick and tired of this nonsense. Drama comes with the territory in rooting for the Sox, but enough is enough.

I'll bet the farm that Valentine gets the axe once the season concludes. But if ownership announces they will give Valentine one more year to straighten out the ship, that will be all I need to conclude that they are treating us like morons, and I will have NOTHING to do with the Boston Red Sox in 2013. I'll keep my money in my pocket and avoid Fenway like the plague until Valentine gets the kick in the ass out the door he deserves.

This week, Valentine is the cover boy on the latest issue of Sports Illustrated, with the title, "How The Red Sox Lost Their Way."

Have I said that this is embarrassing? Yep, I may have used that word once or twice this season.

The Red Sox return to Fenway tonight to play the Toronto Blue Jays (with future Red Sox manager John Farrell?). I can only imagine right now the reception Valentine will get the first time he goes out to remove a pitcher this weekend.

It won't be pretty.