The Animal at Fenway 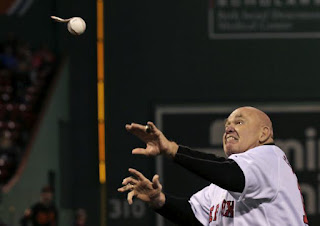 I was surprised to see that my favorite wrestler of all-time, George "The Animal" Steele, threw out the first ball at Fenway Park last before the Sox' game with the Baltimore Orioles.

Naturally, the Animal took a bite out of the baseball before he threw it.

I guess he was the most interesting thing at Fenway last night, as the Orioles won, 4-2. (Have you noticed that the Sox and O's have exactly switched places since last September? Only the results haven't changed.)

Speaking of the Animal, I met him back in late October of 2004 at a swap meet in New Jersey. He was a nice guy, could speak English perfectly, and he saw my Red Sox hat (the Sox won the World Series three days earlier) and we chatted briefly about their historic win.

Then I got an autographed picture with him, and he asked me if I'd like to choke him out or he would choke me out in the pic. I said, "I would be honored if you choke me out, Mr. Steele." 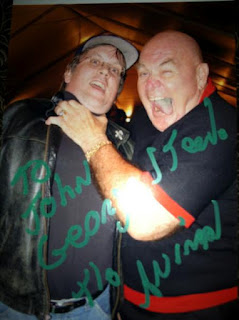 So here it is. One of my prouder moments.

Long live The Animal.
Posted by The Omnipotent Q at 11:48 AM

Hey John
What's your take on the Melancon-Andino beanball?
The Wayward

Hey Pete: I'm not totally sure, but it could have been a little payback for last September, as Andino was a little too vocal after the O's knocked the Sox out last September. I certainly don't agree with throwing at someone's head. Melancon wasn't with the Sox last year, though, and has been a disaster in relief. Hope all is well with you, and I hope your boys can grab the division. As my dad likes to say, "Anybody but the Yankees!"

That is an awesome fucking picture.

Thanks Jere. It was a thrill meeting the Animal, and talking about the Red Sox 2004 win with him especially.