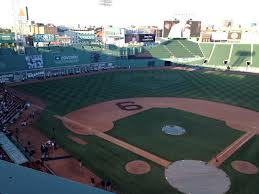 The Red Sox put together a touching tribute to the late, great Johnny Pesky at Fenway Park after yesterday's 2-1 win over the Orioles. I was able to watch it on NESN, and it lasted just over 90 minutes.

It was great to see just about the entire team there, along with many former Sox greats, everyone from Luis Tiant, Pedro Martinez, Rich Gedman, Jim Rice and even Roger Clemens was there. (It's pretty clear to me that he is looking to mend fences with the team and fans especially, and put a lot of the ill will behind him.)

Red Sox Nation Poet Laureate Dick Flavin was there, and spoke eloquently of Johnny. (I met him at a BLOHARDS meeting a few years back.) Groups of former players spoke about their cherished memories of Johnny, and my favorite was from the great Bill Lee, after pointing to a picture of Johnny with "The Teammates":

"See those guys? They're from the West Coast. The land of fruits and nuts."

It instantly made me laugh, and brought back cherished memories for me, as my beloved late Uncle Paddy, who once lived in the Bay Area, used to say the same line about California.

The memorial included film clips of Johnny's life and career (note to NESN: what was with the commercial in the middle of one of them?), the players leaving roses at a huge number six in the dirt at shortstop, and at the end, with the music of "Field of Dreams" playing in the background, the current and former players went to a newly-painted yellow Pesky Pole and signed it with markers.

I had a hard time not shedding a few tears.

It was a nice way for the team to remember one of it's most beloved figures.