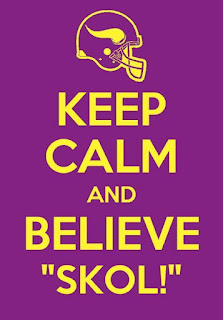 How about those Minnesota Vikings?

It was a great football weekend, with Notre Dame beating Michigan on Saturday, and the Vikings pulling off one of the upsets of 2012 with a 24-13 win over the San Francisco 49ers at the Metrodome on Sunday.

I follow the NFL on Sundays on NFL RedZone, which I highly recommend. It gives looks into all NFL games played during Sunday afternoons, and I love it. I followed the Vikings -49ers game there all day.

And every time I looked, the Vikings seemed to be doing something positive.

Big day for Christian Ponder. He threw two TD passes to Kyle Rudolph, and both times he was under some heavy pressure. Love the kid's poise.

The Vikings played the first half without a penalty or turnover, while the Super Bowl-favorite Niners looked flat. Ponder threw for 198 yards, while Adrian Peterson had a solid game, rushing for 86 yards on 25 carries.

The Vikings also ended Alex Smith's team record for not throwing an interception, as he was picked off late in the 4th as the Niners were driving. His record ended at 250 attempts.

The Vikings are now 2-1. I like what I see so far, and I was curiously optimistic during preseason. They finished 3-13 last season, but I really felt they weren't nearly that bad and still had some talented players. They have another tough test next week, as they play the Lions in Detroit.

Believe.
Posted by The Omnipotent Q at 11:50 AM