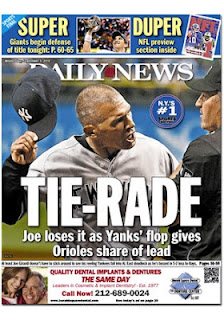 They beat the Seattle Mariners last night, 4-3, behind Jon Lester and with home runs by Cody Ross and Ryan Lavarnway.

The West Coast Death March comes to an end tonight.

And speaking of death marches, you may have noticed that the New York Yankees have officially blown a 10-game lead for the first time, as the Baltimore Orioles caught them last night with their win in Toronto, and New York's loss in St. Pete.

The tabloids in New York are having a field day, with headlines like "Tankees" and "One Fine Mess."

But I am not jumping for joy here, as there still is plenty of games left to play, and the math says the Yankees are still very much in the race, despite their recent slump.

The tabloids bozos are calling this the worst collapse in the history of the franchise. I guess they forget about a certain four-day period back in October 2004...
Posted by The Omnipotent Q at 12:38 PM