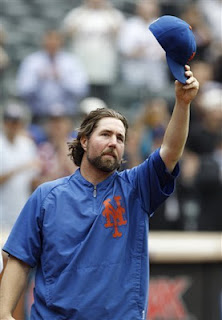 You could argue MLB's best story is Miguel Cabrera's bid to become the first player since Yaz in 1967 to win the Triple Crown, the emergence of players such as Mike Trout and Bryce Harper, or the winning seasons of the Washington Nationals and Baltimore Orioles.

Dickey was a journeyman knuckleballer who had been released by three teams, when Omar Minaya, who had always liked him, signed him to a minor league contract with the Mets in 2010. (I actually wrote something nice about Minaya. Wonders never cease.)

And now, he has a legitimate shot to win the National League Cy Young for 2012. He won number 20 yesterday with a 13-strikeout performance in a 6-5 win over the Pirates at Citi Field.

He wrote an excellent biography of his life called "Wherever I Wind Up", which is one of the more honest books I have ever read. And a new documentary called "Knuckleball" is a terrific story of Dickey, Tim Wakefield and the others who turned to that strange pitch to salvage their careers.

And if that wasn't enough, Dickey climbed Mt. Kilimanjaro in Africa earlier this year.

Dickey is without question the feel-good story of 2012 in MLB.