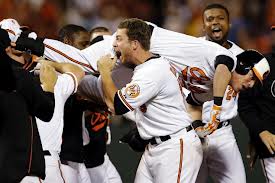 Allan over at Joy of Sox posted a link to an article on his site that was written by the New York Daily News' Bob Raissman that really got my attention this morning.

"John, you would've thought they won the World Series the way they celebrated."

News flash to Waldman: EVERY team does that celebrating crap after they win a game at home in the 9th or extra innings. Every single one.

As many of you who read my stuff here know, I have been railing for years about these idiotic "celebrations" that happen every time a team wins a game in their last at-bat at home. Teams acting like they won the damned World Series just because someone won it in their last at-bat. I wasn't pleased to see the Red Sox acting like wild idiots after the win on Tuesday. I was happy for the win, but I'm always concerned of a needless injury happening in those "pig piles." No one remembers the devastating home plate injury Kendrys Morales suffered after he had to leap in the air after hitting a home run to win a game in 2010. It only cost him a year and a half of his career.

The celebrations have gotten wildly out of control. Earlier this week, I saw when the Orioles beat the Rays in the ninth inning, the Oriole players literally picked up hero Nate McLouth and it looked like he was crowd surfing (see photo). I can only imagine the outcry if McLouth fell and had a serious injury happen to him.

I guarantee you that there will be another serious injury to a player doing this stupid nonsense in the near future. It's not a matter of if, but when and who.

As I have written before, MLB will do nothing about until a major star gets hurt. Kendrys Morales clearly isn't a big star, and his injury is pretty well forgotten.

Waldman has her gall to criticize the Red Sox for their celebrating on Tuesday, when the team she covers and the other 28 do the exact same thing, after every single win in their last home at-bat.
Posted by The Omnipotent Q at 11:50 AM

I guess a pie in the face doesn't count as a celebration.

I'm not sure, but I think the NYY started that silly nonsense. That has become a cliche, like dumping the gatorade over the coach's head in football.

And Chris Coghlan of the Marlins actually blew out his knee two years ago trying to put the shaving cream pie in a teammate's face. Beyond stupid.

As a devout Yankees fan let me say that I laugh out loud at the absurdity of her comment. Her broadcast partner - whether it is Game Six of the 2009 World Series or the sixth game of a West Coast road trip in mid-May ends every Yankees victory with that idiotic, "The Yankees Win! The Yankeeeeeees Wiiiiiiiiin!" cry.