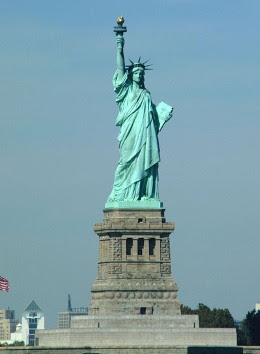 Another ugly Red Sox loss on Saturday, and thankfully, another one I did not witness.

I went to the Statue of Liberty with my British friends, sightseeing once again. (Boy, the security to get on the boat is enormous, like going through airport security. Did everything but take off my shoes. It had been nearly 20 years since I saw the great statue up close.) So I am glad I was once again away from my TV set, and checked the cell all game.

The news was rotten most of the day. The Sox pitching continues to be atrocious, and they gave up four New York home runs, and lead the AL with 19 allowed. They have had one terrific start (Jon Lester's last Thursday), and seven that have left a whole lot to be desired. The starters team ERA is now over 9.00 not counting Lester's gem. Stinko.

1-7 now, and I saw a great stat the other day. With all the worrying about the team's putrid beginning of 2011, a friend of mine pointed out that the 2001 Oakland A's began that year 2-10, and finished the season at 102-60, winning the Wild Card. (They settled for the Wild Card because the Seattle Mariners won an AL record 116 games that year. A record that will forever be a footnote, as they lost to New York in the ALCS that year.)

Sure it's a rotten way to begin a campaign, but don't listen to the so-called experts who talk incessantly about "how no team has ever won a World Series starting off 0-6." That's because the overwhelming number of teams beginning that way were putrid teams. This Sox team is many things, but certainly not putrid. Do you really think either Baltimore or Toronto will have a better record than the Sox in September? New York is really the only team in the AL East the Red Sox will be challenged by this year, and they haven't put up any kind of insurmountable lead.