Wake's Back. Papi's Back. 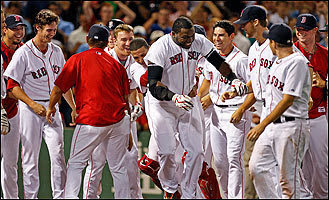 It did my old heart some good seeing Tim Wakefield back and doing what he does best: eat innings. The knuckler was doing some serious dancing, and the White Sox really looked befuddled. Even Victor Martinez did a fine job behind the plate last night: no passed balls. (He even used a first baseman's mitt doing the catching.)

It looked like Wake would win his first start back after spending more than a month on the DL. But Ramon Ramirez, who continues to be less than stellar after a smoking start in April and May, gave up a game-tying home run to Scott Podsednik to make it 2-2. Finally, Daniel bard came in to smoke Jim Thome to end the eighth. (So why wasn't Bard in there from the start?)

David Ortiz hit a home run in the third to tie the game at 1, and Alex Gonzalez, who the Red Sox got for his glove, hit his second homer of the year in a Red Sox uniform to make it 2-1.

The story of the night was Wake, who went seven solid innings. He was rarely in trouble, allowed just six hits and a walk, and struck out three. Bard pitched a scoreless ninth, and with one out, Big Papi went deep for the second time of the night, a shot right down the right field line to give the Red Sox the win, and Bard his first major league win.

It was Papi's 10th career game-ending home run (I prefer that to "walkoff") and 9th in a Red Sox uniform. He now has 22 home runs on the year. (Remember a time earlier this year when the consensus by some was that he'd be lucky to reach 20?) It sure brought back some fine memories of the recent past.

The Red Sox remained 6 back in the East, as New York beat Texas, and the Sox' Wild card lead increased to 2 1/2 games. The Red Sox go for the four-game sweep over Chicago with Junichi Tazawa on the mound.

The Red Sox also released Brad Penny this morning, by his own request. Billy Wagner will be activated in his place, and will be available in the bullpen tonight.
Posted by The Omnipotent Q at 10:51 AM

Thank Goodness for "Game Ending" instead of today' "Walk-Off" Term. "Walk-Off" sounds like someone went on strike after the game(In the Case of The Mets, Walk-off means that with assistance from the Medical Staff, they left the game for a trip to the DL. Note-1`3 are on that list).