Not Your Average Fenway Night 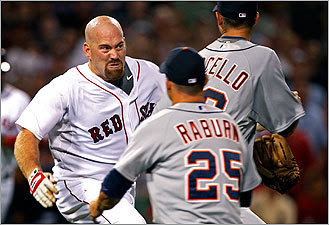 Last night's Red Sox-Tigers had so many things in it:

Hit and brushed back batters (an extension of Monday night).
Youk and Rick Porcello getting friendly on the mound. (I hope Joba Chamberlain was paying attention to this after his game.) Both benches emptied and both players were ejected.
John Farrell and Jim Leyland having some cross words.
Terry Francona getting tossed after arguing a call at second and throwing his gum.
Mike Lowell coming in for Youk and blasting two home runs, the first Sox player to do that since 1967. (I was wondering, has anyone ever come off the bench and hit three HRs? Not sure if that's ever happened.)
Jason Bay getting hot, blasting a three-run shot across Lansdowne Street.
A rain delay coming out of nowhere.
A rookie pitcher pitching his first MLB start (Junichi Tazawa), struggling in the first but settling down and getting the win.

It sure wasn't dull.

You missed the part about our 3 SurvivingGrady posters winning sitting in the Owners Seats last night!!!
They were THRILLED!!! to have front seats to it all1