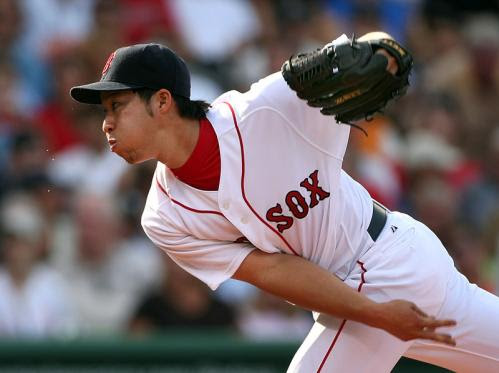 There are fewer things in life I enjoy more than being present when the Red Sox lay it into the Yankees good.

And I was a present witness on Saturday afternoon for the ass hammering the Sox gave the Evil Empire, 14-1. It was quick and fast, and erased the bad memories of Friday night. The Red Sox now lead the season series, 9-5, and one more win will give them the season series for 2009.

The Red Sox have now outscored New York in this series 25-21. Who would have thought that in the fifth inning of Friday night's game?

The Sox scored three in the first and four in the second, pummelling A.J. Burnett and fat contract for a 7-0 lead. It's the third straight time the Sox have given Burnett a whipping at Fenway. (Didn't the Yankees get this guy because his lifetime numbers against the Red Sox were so good?)

The bats were alive, as Kevin Youkilis went deep twice and had six RBI, David Ortiz blasted a solo shot and had three RBI, and Alex Gonzalez hit his first homer back in a Red Sox uniform. The Sox also scored twelve of their runs on Saturday with two outs.

I went up to Fenway with my pal Governor Chris Wertz of Red Sox Nation-NY and about 100 others from the New York area. (Chris did an absolutely amazing job organizing the whole event.) We were sitting in section 3 in right field, and had a great view of the contest. We were joined by former Red Sox pitcher Jerry Casale and his family, and jazz guitar great John Pizzarelli, who did a wonderful job singing "The Star Spangled Banner." John told me the Sox wanted him to do it in under 90 seconds, and I clocked him at 75 seconds.) I enjoyed chatting with Jerry, who sat right behind me and told me stories of his Red Sox career. (Nice job the Red Sox with their trivia question on the board: "What former Red Sox pitcher gave up Carl Yastrzemski's first MLB home run in 1961?" Answer is "Jerry Casale.")

We also held up signs for Red Sox Nation-New York, and in the second inning, we were on the huge video scoreboard in centerfield. (Chris has been promised a copy of it by the Red Sox. Can't wait to see that.) And in the sixth inning, the Fox team of Joe Buck and Tim McCarver mentioned us on the air, and a couple of friends of mine at the park got text messages about it. Nice job by the Fox guys there.

I thought going into yesterday's game that Junichi Tazawa (pictured) might get his head handed to him after what happened on Friday, but the kid looked terrific. He scattered eight hits but showed some great poise, getting out of two jams early on. He pitched six solid innings for the win. He will obviously get the next start later this week, and with Tim Wakefield coming back Wednesday, Bard Penny seems to be odd man out.

We had a great trip up to Fenway on the buses, and an even better time at the park. (On the way back we discovered Tampa Bay beat Texas to extend the Sox Wild Card lead to two.) I have now been to Fenway twice to see the Red Sox play the Yankees, and the composite score is: Red Sox 27, New York 2. The other time I was there you may remember was October 16, 1999: Red Sox 13, Yankees 1. I affectionately call that game "The Clemens Massacre."

I should see the Evil Empire at Fenway more often. 15-1 Red Sox next time?
Posted by The Omnipotent Q at 12:03 PM