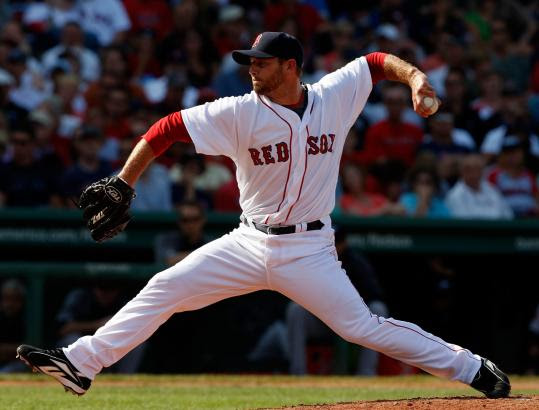 Yep, Paul Byrd, who had thrown a single inning since last September, outpitched and beat the great Roy Halladay at Fenway Park on Sunday.

Byrd was signed by the Red Sox on August 5th, and made four minor league starts before being recalled yesterday. It made all the sense in the world starting him yesterday, and pushing Jon Lester on Tuesday to begin the Tampa Bay series. Byrd looked like the sacrificial lamb with Halladay taking the hill for Toronto.

And since he wasn't traded at the deadline, Halladay looks like he's completely fallen off the map. The Red Sox have hammered him twice, and he had one of the worst outings of his career against the Rays earlier last week. The Red Sox scored single runs off him in the first four innings to build up a 4-0 lead. Halladay went six innings giving up just the four earned runs, including a solo homer to Rocco Baldelli.

Byrd was simply terrific. He went six innings, allowed just three hits, walked three (that was unusually high for him) and struck out one. He gave the Sox more than could have been expected, and after that Terry Francona turned it over to the pen.

Billy Wagner made his Red Sox debut and looked sharp. He allowed a double to Adam Lind, but struck out the side in the eighth. He was consistently hitting 95 on the radar gun and his fatsball had plenty of movement on it. Takashi Saito completed the shutout in the ninth to give the Red Sox a sweep over Toronto, 7-0, and the Sox have now won six of their last seven.

They remain 6 back in the East as New York won, but the Twins come-from-behind win over Texas extended the Red Sox Wild Card lead to 3 1/2 games. The Sox now hit the road for seven games, against two strufggling teams: Tampa Bay and Chicago.

Daisuke Matsuzaka had a rough outing with AA Portland yesterday, throwing 49 pitches in the first inning, allowing New Hampshire five runs in that frame, while walking four. He pitched a perfect second inning, but that was it. Don't expect him back in Boston soon.

And Tim Wakefield will probably have a cortisone shot on his back today. He was better yesterday, but it's not known when or if he will pitch again.
Posted by The Omnipotent Q at 11:50 AM