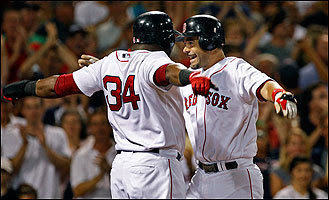 It looked for all the world like Clay Buchholz was sending the Red Sox to a loss in the opening game of the four-game series with the White Sox. Chicago scored two in the second and two more in third on rookie Gordon Beckham's two-run blast.

But with the score 4-1 in the bottom of the third and the bases loaded with two out, Big Papi hit a 3-0 pitch down the first base line that looked like a sure third out. But pitcher Jose Contreras booted the ball allowing Ortiz to reach and made it 4-2. A walk and a wild pitch later and it was 4-4. Mike Lowell (pictured with David Ortiz) really made Contreras pay as he launched a pitch onto Lansdowne Street to make it 7-4 and end the night for the White Sox pitcher. He should have been out of the inning with a 4-1 lead intact, but six unearned runs later he was taking an early shower.

The Red Sox added two more runs and it looked like an easy win was on the horizon. But Buchholz continued to struggle, and allowed a three-run shot to Paul Konerko to make it 9-7 in the fifth. Terry Francona took no chances and pulled Buchholz just one out away from a win. (That's the second time Buchholz has missed a win by just one out in the fifth inning this year. Remember the 18-10 win in Baltimore?) He wound up allowing 7 earned runs and struck out 3 while walking 3.

The bullpen took over and allowed just one run over the remaining 4 1/3 innings. The Sox tacked on three more runs in the eighth, highlighted by a home run by J.D. Drew.

Ramon Ramirez got the win, and the Red Sox are now 1 1/2 games up on Texas in the Wild Card, who were idle last night. They open a series in the Bronx tonight against You Know Who. I'll just watch that series and see what happens.
Posted by The Omnipotent Q at 10:53 AM