Determined to Give One Away, But Not Succeeding 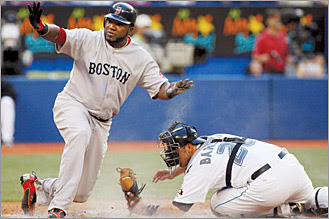 Last night had all the earmarks of a game the Red Sox would lose. They jumped out strong, scoring four runs, and added to it. But Josh Beckett had a rare bad night, allowing the Toronto Blue Jays to come back, allowing home runs to Ricky Ruiz (who?), Travis Snider and Rod Barajas, and seven runs total in 5 1/3 innings.

It was 7-7 at Beckett's departure, but the Red Sox scored three in the eighth, based on some sloppy Toronto defense, to grab the lead. But Daniel Bard struggled (as he has been lately), allowing two runs back, and Jonathan Papelbon loaded the bases in that inning before finally getting a long fly to preserve the lead.

David Ortiz and Jason Bay hit home runs earlier (Papi scored three times) and it looked like the bats would give Beckett enough support. But the Jays were keeping with Beckett, and the righty was getting tagged pretty good.

Papelbon held on in the ninth for his 29th save. Good news came out of Texas as the Minnesota Twins came from behind to beat Texas, 9-6, to put the Sox and Rangers in a tie for the top of the Wild Card standings.
Posted by The Omnipotent Q at 11:13 AM