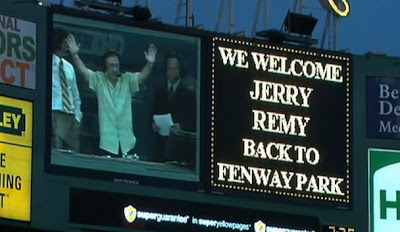 The Red Sox rolled to their third straight win over the Detroit Tigers, 8-2 at Fenway last night. Lots to like: Mike Lowell and Jason Bay both going deep again (and both are heating up big time), and Josh Beckett is making a strong case for the AL Cy Young Award, winning his 14th game of 2009, the first pitcher in MLB to reach that mark.

He allowed just two solo shots, to Carlos Guillen and Marcus Thames, in going seven strong innings. He retired the first 11 hitters he faced and didn't allow a hit until Guillen's homer in the fifth. He now has a record of 6-0 and an ERA of 1.20 in his last seven starts at the Fens.

It was Bay's third homer in the last five games, and Lowell's third in two nights. Lowell will definitely be in starting lineup for the forseeable future, as Kevin Youkilis was hit with a five-game suspension for the fight on Monday night, and is accepting it and will set through the Texas series on Sunday. Rick Porcello was also hit with a similar suspension but is appealling.

The Red Sox gained no ground in either race (division or Wild Card), as both New York and Texas both won.

But the best news of all was the surprise return of Jerry Remy to the NESN booth in the second inning last night. He looked good and talked with Don Orsillo and Dennis Eckersley about the trials and tribulations of the past few months. (He talked also with the media about the depression he's been battling since he's been away.) He gave no indication of exactly when he's be back, but he looked better than I thought he would. He was introduced to the Fenway Park crowd in-between the top and bottom of the second, and received a rousing ovation. (With thanks to Joy of Sox for the above photo.)

Welcome back, RemDawg. Hope to see you back soon.

And congratulations to old friend Pedro Martinez, who got his first win of 2009 with the Phillies, going five innings in his debut and allowing three runs to the Cubs in a 12-5 win.
Posted by The Omnipotent Q at 11:16 AM