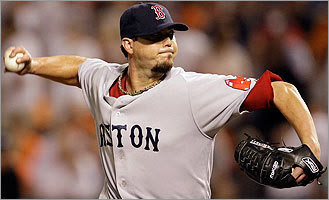 Victor Martinez made a successful debut in a Red Sox uniform on Saturday night, and Josh Beckett became the American League's first thirteen-game winner as the Sox rolled to their third straight win, 4-0.

Martinez went 1-for-5 with an RBI and a run scored. Kevin Youkilis went 4-for-4 and Dustin Pedroia homered in the first to open the scoring. The Red Sox had many opportunities to score runs, but left the bases loaded twice and two men on three times, for a total of 15 left.

Rookie Josh Reddick, who was called up from AA Portland on Friday, had two doubles for his first two MLB hits. He will most likely play on Sunday, as Jason Bay left in the 6th inning on Saturday with a leg cramp.

New York was soundly thrashed by the White Sox on Saturday afternoon, 14-4, so their lead in the East has now been sliced down to just one-half game. Clay Buchholz takes the mound today in Baltimore as the Red Sox go for the sweep at Camden Yards. And his batterymate today will be Victor Martinez, catching his first game in a Sox uniform after playing first base last night.
Posted by The Omnipotent Q at 11:28 AM

absolutely LOVE the title! It's so hard to keep coming up with clever originals. Love the new guy!

Sometimes the titles come easy, Tex, and sometimes they require lots of thought. Thanks, and I love Victor Martinez too!