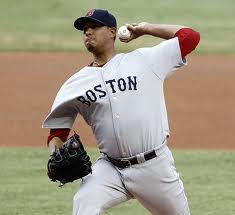 Felix Doubront flirted with a no-hitter last night against the Miami Marlins, and I was glad when it was gone.

Doubront had a 4-0 lead into the sixth and hadn't allowed a hit, when he gave up a home run to Jose Reyes. No-hitter and shutout gone in one fell swoop. I was glad the no-no disappeared, as all I wanted to see was a well-pitched game and a win, as Doubront had never gone beyond seven innings in his young career. Anything else would have been gravy.

Doubront struggled starting the 8th, giving up a single and double. The Marlins scored one run, but Felix gutted it out and got the Sox to the 8th with a 4-2 lead. He wound up with 9 strikeouts and just one walk.

Doubront won his seventh game of 2012, and the Red Sox are now 31-32, and tied with Toronto for 4th place. They are off today, and head for Wrigley to face old friend Theo Epstein and his lowly Cubs this weekend.
Posted by The Omnipotent Q at 11:37 AM