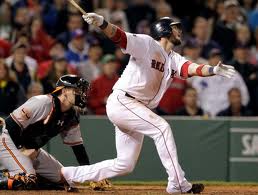 Daniel Bard was sent back to Pawtucket, and Darnell McDonald was activated from the DL. The Sox still clearly see Bard as a starter, and he'll have to work out the bugs at AAA. This means that Daisuke Matsuzaka, who made the start last night at Pawtucket, will make his MLB debut for 2012 this Saturday against Washington at Fenway.

Dustin Pedroia made his return after a week sitting on the bench with a thumb injury. He went 0-for-3 with a walk and sacrifice fly.

The Sox played a topsy-turvy game with the Orioles last night, falling behind early, then tying it, losing the lead again, getting the lead for the first time, and then falling behind yet again. Jon Lester pitched 6+ so-so innings, leaving with a 4-3 lead. The pen had a rare rough night, as Scott Atchison, who has been brilliant, gave up two runs and the lead in the 7th.

But Jarrod Saltalamacchia looked like he was going to be the late-inning hero again, as with the Sox down to their last strike, launched a two-run shot to the Monster seats to tie it at 6. (Umps looked at the replay but the ball, which was touched by a fan, clearly went over the wall.)

Alfredo Aceves was sharp in the ninth, but was hardly that in the 10th, walking the first batter and allowing Baltimore two runs, and that held up for an 8-6 loss.

Fourth straight loss at home to the Orioles.

The Red Sox find themselves back in fifth, three behind Baltimore and Tampa Bay, who are tied for first.
Posted by The Omnipotent Q at 11:03 AM