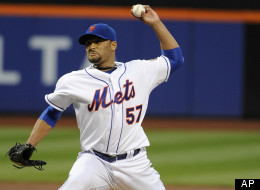 Johan Santana pitched the first no-hitter in Mets history at Citi Field tonight, an 8-0 win over the defending World Series champion St. Louis Cardinals. (It was also the first time the defending champs were no-hit since former Met Nolan Ryan did it to the Oakland A's in 1990.)

It took 134 pitches for Santana to do it. Kudos to manager Terry Collins for letting Santana, who was coming off shoulder surgery last season, go after history.

David Freese will long be remembered in Mets history. Last year's NLCS and World Series MVP was the final out, as Santana struck him out swinging to end it. Mike Baxter made a sensational catch in left in the 7th to preserve it, but had to leave the game with a shoulder injury. (Santana owes him big time!) Third base ump Adrian Johnson blew a call in the 6th inning that should have been a Cardinal hit, when Carlos Beltran hit a ball that hit the chalk of the third base foul line, and it was called a foul ball.

No matter. It's still a no-hitter.

I REALLY wanted to see this happen. I turned the Red Sox game in Toronto off and watched just the Mets game. My heart was pounding the entire ninth inning. I remember as a 7-year-old seeing Tom Seaver lose his perfect game in the ninth inning against the Cubs when a scrub outfielder named Jimmy Qualls broke it up with a single. I also remember when Seaver lost another in the ninth against the Padres on July 4, 1972.

The long nightmare is over for Mets fans. The Mets have had pitchers come so close, but leave the team and throw one: Seaver, Ryan, Dwight Gooden, Hideo Nomo, David Cone, Mike Scott, and Philip Humber are the ex-Mets who have tossed no-nos since leaving Queens.

And the San Diego Padres are now the only MLB team without a pitcher throwing a no-hitter.

Congratulations, Johan.
Posted by The Omnipotent Q at 10:20 PM