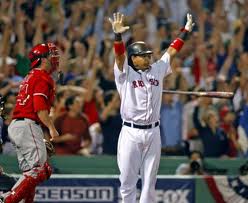 It looks like the Manny Ramirez Era has now finally come to a close, as he asked the Oakland A's for his release, and the club granted it today.

No word as to whether he will hook up with another club. But you have to think this is finally the end of the road for the 2004 World Series MVP.

He leaves an unbelievably mixed legacy.

Thanks for the memories, Manny.
Posted by The Omnipotent Q at 9:58 PM