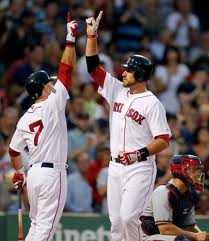 As the Kevin Youkilis trade rumors continue to swirl, Will Middlebrooks continues to impress at the bat.

His third inning home run was among three hits he had against the Braves, and it was ninth on the season. He is now an amazing 10-for-his last-14. Dustin Pedroia appears to be busting out of his slump, as he had three hits and two RBI, and Daniel Nava had two RBI as the Red Sox coasted to an 8-4 win over the Braves.

The Sox have now won 8 of 10, but gained no ground on New York, who beat the Mets last night. The Sox remain 5 1/2 back, tied with Toronto for fourth.

Aaron Cook comes off the DL today to make the start in place of Clay Buchholz, who was placed on the DL with a gastrointestinal illness. Oh terrific, just what the Red Sox need, more pitchers/players occupying a DL slot.
Posted by The Omnipotent Q at 11:15 AM