Mariners Get Cooked With Just 81 Pitches 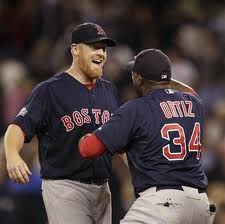 As good as Franklin Morales was on Thursday night, Aaron Cook was even better on Friday.

Two spectacular performances on back-to-back nights from guys who weren't even in the rotation on Opening Day. (Don't hurry back, John Lackey. Oh yeah, remember him? I've done my best to forget him.)

Cook threw just 81 pitches in a two-hit performance against Seattle last night, going just one batter over the limit. (Dustin Pedroia turned a simply amazing double play in the eighth to wipe out the last man who reached base.) He struck out just two, and the Mariners were pounding balls into the ground all night. It was the fewest pitches anyone has thrown for a complete game this season, and the fewest since 2009.

At first the Red Sox were stymied by Hector Noesi for the first four innings. I was watching the game on the Mariners feed and Dave Sims mentioned that Noesi had dropped his last five decisions. "How are the Sox not pummeling this guy?" I wondered to myself. And almost on cue, Will Middle brooks blasted a home run to left that broke the scoreless tie. And then Cody Ross blasted one even further, to the second deck in left to make it 2-0. And before the inning was over, Daniel Nava hit the third home run of the inning to make it 3-0.

In the sixth, Jarrod Saltalamacchia hit a two-run shot to left to cap the scoring at 5-0.

Everyone but New York in the AL East won last night, so the Red Sox are still tied for third, 5 1/2 games back.

Josh Beckett makes his return from the DL tonight at Safeco.
Posted by The Omnipotent Q at 11:28 AM