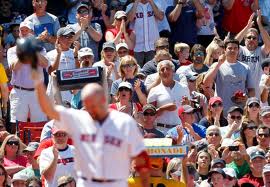 The Greek God of Walks is on the move.

There was no surprise that the Red Sox traded Kevin Youkilis, and it happened after Sunday's win against the Braves. He was traded with cash considerations to the White Sox for utility infielder Brent Lillibridge and right handed pitcher Zach Stewart. (Stewart will go to AAA, and Lillibridge will report to the Red Sox.) 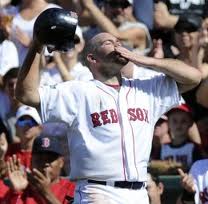 It was an emotional day at Fenway on Sunday, as the Fenway Faithful gave Youk two standing ovations, one at his first at-bat, which he acknowledged with a tip of his cap, and after his last at-bat in the 7th, when he tripled in a run. Bobby Valentine sent in Nick Punto to run for him, and Fenway went crazy. The Red Sox came out of the dugout to hug their teammate, and Youk had to come out of the dugout after he went in to thank the crowd for their ovation.

It was a tremendous day that really made me proud to be a Red Sox fan.

The Red Sox have now won 9 of 11, and the Blue Jays come in for three. 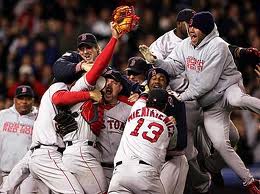 But the story of the day was Kevin Youkilis. He spent nine seasons in a Red Sox uniform, and was an important part of the 2004 and 2007 World Series championship teams. But his time to move on had come, with the emergence of Will Middlebrooks.

That leaves David Ortiz as the last member of the 2004 champions still with the team.

Thanks for everything, Youk. All the best to you in ChiTown.
Posted by The Omnipotent Q at 10:05 PM