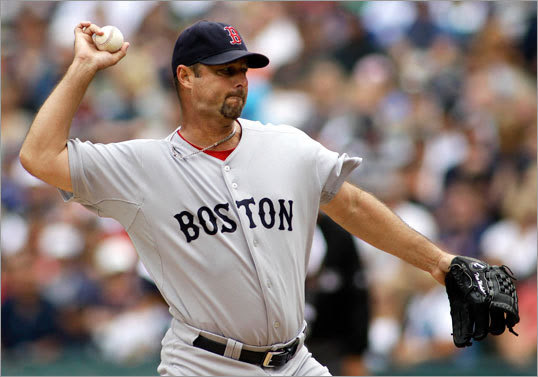 It was discouraging to see Tim Wakefield come up short once again in his fourth attempt for victory number 200.

Terry Francona gave him every chance for it, as Wake went the full eight innings in Seattle, but it was a 5-3 Seattle win. Charlie Furbush outpitched Wake for the win.

Hang in there, Timmeh.

I was watching the Mariners feed today, and they had the most incredible stat on Wake: he is 2-17 against West Coast teams on the road since 2000 (includes the 3 AL coast teams and the 3 NL ones,too). He is something like 46-42 on the road against all other teams. (Not sure of the exact figures, but he's over .500 against them.)

The umps sure didn't help today. Crappy calls against the Sox today, as Dustin Pedroia was called out at first on a play that pulled the first baseman off the bag. Later in the game, Jed Lowrie didn't get the benefit of the "neighborhood" play that are given to all fielders around second base on possible double plays, and that led to two more Seattle runs. And the home plate ump was absymal to both teams. (MLB umpires are so rotten these days I won't even bother to identify today's culprits.)

Kevin Youkilis banged a two-run shot in the eighth that made the score closer at 5-3.

The game lasted just 2 hours and 14 minutes, and once again, it makes a BS liar out of that hack sportswriter Wallace Matthews.

Posted by The Omnipotent Q at 7:29 PM