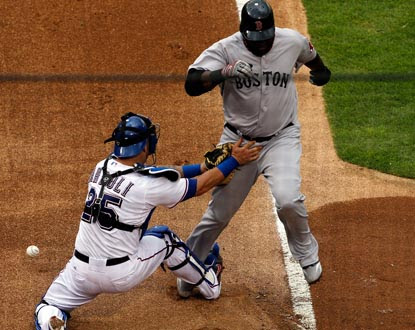 The Red Sox pulled out the whoopin' sticks in Texas last night, and will have a winning road trip after they put the hurt on the Texas Rangers, 13-2, last night.

The Sox scored early and often, breaking from the gate with 4 in the first inning in support of Josh Beckett, who has gotten very little from his teammates in recent games.

Adrian Gonzalez, Jacoby Ellsbury and Carl Crawford all went over the wall, and David Ortiz had a successful return after missing nine games, going 2-for-5 and scoring two runs (including running through a stop sign in the photo). Crawford had a game-high five RBI.

Beckett went six innings, struck out four and walked two, and allowed one run. He's now 11-5 on the season.

While in the Bronx, old friend Coco Crisp was a one-man wrecking crew, going 4-for-4 and blasting two home runs, and a three run shot in the 10th off Rafael Soriano, to give the A's a 6-4 win and drop the Yankees into second place by one game.

The Sox are now 5-2 on this midwest trip, which concludes tonight in Arlington. They can do no worse than a split in Texas, with Andrew Miller pitching tonight.

And BTW, with the hurricane bearing down on the Northeast this Sunday, there are four games that are in definite question, and barring a miracle, won't be played. They are games in Baltimore, Philadelphia, New York (Mets), and the Red Sox-A's contest at Fenway. Wouldn't it make sense to make them doubleheaders on Saturday right now? Or does that make too much sense?