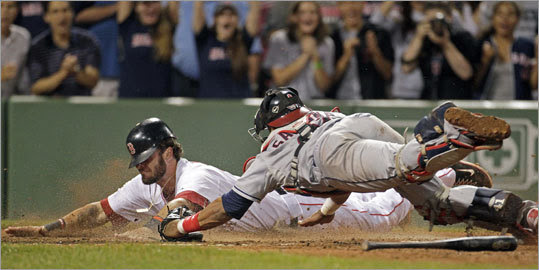 One of the only good things about last night's 95-minute rain delay was that I was able to see the finale of last night's 3-2 Red Sox win over the Indians.

Trivia Night concluded in the 8th inning, just in time for me to see Kevin Youkilis get tossed after complaining about being called out on a check swing. (He had homered in his previous at-bat.) It was very borderline, but Youk used some colorful language and got run.

Jason Varitek singled with one out, and Terry Francona wisely ran for him with Jarrod Saltalamacchia. Josh Reddick singled, and then Jacoby Ellsbury lined a single to center. Salty was hauling ass around third, and fortunately for all concerned, Ezequiel Carrera's throw from the outfield was slightly off to the first base line and Salty got in with a great slide to the right of the plate. It was Ellsbury's first "walkoff" hit in his career.

Jonathan Papelbon got the win. Josh Beckett went six, and allowed just two solo home runs. I would guess that the long rain delay may have forced Tito to pull him early. Anyway, the pen was stellar following him. Franklin Morales struck out three in two innings while Pap set the Tribe down 1-2-3 in the ninth.

New York's win in Chicago (a rain shortened game) keeps the Sox lead at 1 game.
Posted by The Omnipotent Q at 11:16 AM