The Onus Is Now on The Commander 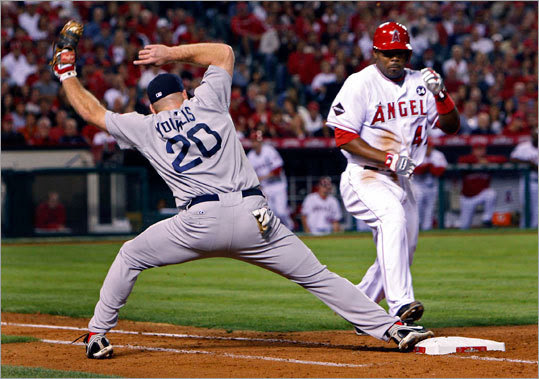 Not the greatest effort by the Red Sox on Thursday night against the Angels as they opened the 2009 postseason.

Jon Lester was terrific for the first four innings, before throwing a grapefruit over the plate to Torii Hunter, who mashed a three-run shot into the rocks in left center. John Lackey was even better, going 7 1/3 shutout innings to get the win, 5-0. The Sox only had one legitimate threat, but that went nowhere in the sixth when Kevin Youkilis bounced to third with two on to squash a possible rally.
It was the first time the Angels had beaten the Sox in the postseason in Anaheim since Game 4 of the 1986 ALCS. (That's four ALCS' ago, for those of you scoring at home.)
The Sox played some shoddy defense, making three errors. Only Jason Bay's over throw at third cost a run (but it was already 4-0 at the time in the seventh). But I have rarely in my life seen such extremely bad first base umpiring than I saw from C.B. ("Clearly Blown") Bucknor last night.
He blew three calls at the base (two against the Sox and one against LA) that had a jam-packed Professor Thom's up in arms. The last one was so egregious that MLB should look into replacing this total incompetent as an umpire. (And how did this guy get a postseason assignment in the first place? As a birthday present?) Bucknor is just fortunate that none of his three blown calls impacted the game in any significant way. (The home plate umping by Joe West left a lot to be desired also, as he appeared to be squeezing both starters, especially Lester.)
He called Howie Kendrick safe on a play at first where Mike Lowell threw the ball high to Youk, but he made a great play and beat Kendrick by at least half a step (pictured). Yet, Bucknor, who wasn't blocked off the play, called him safe. It didn't hurt the Sox in the long run, as Kendrick did not score. But it was so obvious that Bucknor blew it, and it will be interesting if he has the decency to admit he screwed up big time. But knowing these overblown umps, he'll make some lame excuse why he got it wrong.
And the scary thing is, Bucknor, who named baseball’s worst umpire in a 2006 players’ survey by Sports Illustrated, has home plate on Friday night's Game 2, as Josh Beckett takes the hill.
Well, Commander Kick Ass has to come to the forefront and show some of that 2007 bravado and get it knotted at 1 so the Sox can get back in the ALDS in Boston.
Posted by The Omnipotent Q at 3:11 AM

Not good.
Here's hoping CKA does it, as I'm certain he will.
Actually it's not him I'm concerned about him, I would just like to see our offense bounce back the right direction. They've bounced back and forth from shining to stagnant all season, and this would be a good time to veer back toward the positive side.
The umpiring DID suck, but that's not what hurt us here.
Win one tonight, plz, guys.
I realize, of course, that even if we lose we would just pull our usual sweep of the last 3, but my nerves would be lot healthier if we didn't have to do that.

I'm rooting for this one to go to 5 games and the winner will be my rooting interest in the AL (unless somehow the Twins can get past the MFY). I'll be in right field with my Jesus Hates the Yankees shirt.

Have a great time, Ken. Will be thinking of you as I'm in Thom's tonight!

Big game tonight, SoSock. Granted Bucknor's blindness didn't lead to any runs, but that was simply embarrassing that an ump can miss three obvious calls like that in such a big game. And he has the plate tonight. Ugh.