ND Holds Off Late BC Rally 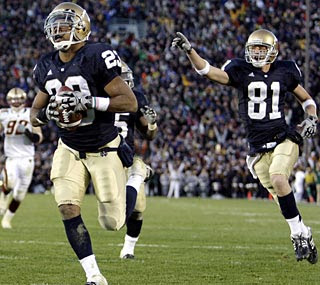 The Cardiac Kids were at it again in South Bend yesterday, as Notre Dame had yet another nail biter, this time against Boston College, but this time they broke a six-game losing streak against the Eagles in pulling off a 20-16 win.

Brian Smith intercepted a pass from Dave Shinskie with just over a minute to play as BC was driving down the field to cap the Irish win.
It was a huge day for both Jimmy Clausen and Golden Tate, as Clausen went 26-for-39 for 246 yards, which included two TD passses to Tate, who caught 11 on the day for 128 yards.
The defense struggled at times, but BC coughed up the ball on three separate occasions as they were driving, and they gave up the ball a total of five times on the day.
ND led 13-9 at halftime, and it included a safety by BC, when Clausen was caught for intentional grounding in the end zone for the Eagles' first points. BC had the lead 16-13 in the fourth when Cluasen hit Tate for the second TD from 36 yards out (pictured).
It was a struggle at times for the Irish, but they found a way to win. They are now 5-2, and have a rare Saturday night game at South Bend against lowly Washington State.
Posted by The Omnipotent Q at 12:28 PM

two very interesting football games for you this weekend. Congrats and condolensces (bad call against Vikings)

Still fuming over that call, Rick. What's with these incompetent sports officials these days? It's like a bad rash.