And That Wraps Up Another Baseball Season 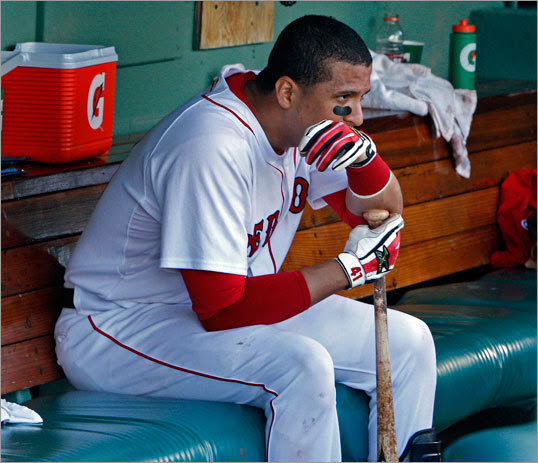 It all came to a sudden and crashing end at Fenway Park today as the Los Angeles Angels scored three runs with two outs and none on in the ninth to advance to the ALCS with a 7-6 win over the Red Sox.
Jonathan Papelbon was trying for a four-out save and got three of them. Then the roof fell in, as he gave up a single to Erick Aybar, walked Chone Figgins (that was the key at-bat), gave up a double to Bobby Abreu to make it 6-5. Torii Hunter was walked intentionally, and then Vladimir Guerrero hit a ball that when it left the bat I thought was going to be caught, but it fell in front of Jacoby Ellsbury to make it 7-6.
It was the first three runs Papelbon had surrendered in the postseason ever (did anyone else notice that TBS flashed that stat the moment before the hit?). The loss is totally on the shoulders of Papelbon, who for all his saves, had a shaky season overall, walking too many hitters and making too many saves look much more difficult than they should have. His last appearance of 2009 is what fans will take into the winter of him.
But, you have to take your hat off to the Angels. They deserved to win this series. They outhit, outpitched, out defensed, out everythinged the Red Sox. I see a lot of "2004 Red Sox" in this club. They don't quit and seemed to play with more passion and intensity in this series. They simply wanted it more.

I wish the Angels well in the ALCS. I won't be watching, but I hope they do well. It wouldn't shock me to see them carry this momentum all the way to a World Series title. They've overcome a lot, like losing Mark Teixiera to free agency and the tragic death of Nick Adenhart.
So that takes care of the 2009 baseball season for me. I'll be talking about the Sox over the winter for sure, as it will be an interesting time to seewhat changes they make.
Four months until pitchers and catchers report. Until then, bring on the football season.
Posted by The Omnipotent Q at 5:46 PM