Favre Gets His 32nd Victim: The Packers 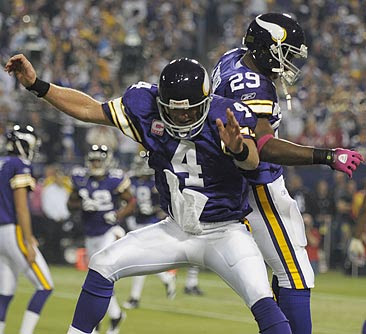 The matchup everyone was looking at before this NFL season absolutely lived up to its incessant hype, and Brett Favre was nothing short of superb as the Vikings beat archrival Green Bay, 30-23, on Monday night at the Metrodome. (Actually, did you know the Metrodome has a new official name? Mall of America Field at Hubert H. Humphrey Metrodome. Oh brother.)

Favre now owns a win over all 32 NFL teams, something no other NFL QB has done. He threw three TDs, went 24-for-31 for 271 yards ina game the Vikings never trailed. He threw TDs to Sidney Rice, Bernard Berrian and Visanthe Shiancoe.

Adrian Peterson also scored on a one-yard TD, and Jared Allen got a safety early in the 4th quarter, when he sacked Aaron Rodgers in the end zone. The Vikings also sacked Rodgers eight times on the night.

The Packers stopped Peterson most of the night, as he rushed for just 55 yards on 25 carries. But the story of the night was of course, Favre, facing his former club for the very first time. It was apparent from the start that Favre was pumped up for this game, and the Vikings led 21-14 at halftime.

Favre engineered a terrific drive to open the third quarter, as he drove the Vikes 80 yards, ending with a 31-yard pass to Berrian to make it 28-14.

The Vikings are now 4-0, and face the hapless St. Louis Rams next Sunday. They will see the Packers again, on November 1st, in Green Bay. Mark your calendars for that one.
Posted by The Omnipotent Q at 12:16 AM