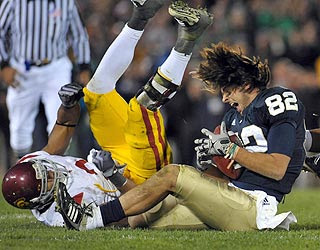 Notre Dame came close to pulling off a big upset on Saturday against USC, but wound up coming short in the end.

It was 34-13 early in the fourth quarter, and it looked like the game would turn into a big time rout. But the Irish turned it around, and it eerily reminded me of the USC game of 2005 but it reverse, when USC pulled it out in the final seconds on the infamous "Bush Push" play.
It was another classic USC-Irish battle, but the Trojans held on for dear life in the end. Jimmy Clausen struggled to begin the game, going just 3 for his first 10. USC led 7-0 when ND faked a field goal and Robby Paris (who caught nine passes on the day) caught a pass that brought the Irish down to the 2. Robert Hughes ran the ball in on the next play to tie the game.
It was 13-7 at the half when USC took command, scoring three touchdowns on three consecutive possessions to build up what looked like a comfortable 20 point lead. Clausen scored on a two-yard run to make it 34-20, but the extra point was blocked, and that could have proved to be a big play.
Notre Dame scored on their next possession, with Clausen finding Golden Tate with a 15-yard TD to trim the deficit to seven. Tate had a fabulous game, catching eight passes for 117 yards and 2 TD. His previous TD was a spectacular over the shoulder catch.
The Irish drove down the field on their final possession, getting down to the four yard line. Clausen threw three times into end zone, all incomplete as the clock ran out. He was 24-for-43 for 260 yards and 2 TDs, but was sacked five times by a tough USC pass rush.
It was USC's eighth straight win over the Fighting Irish, and the 7th straight loss by ND to a Top 10 ranked team. (USC was ranked 6th going in.) That matches a school record set from 1984-86, set during the Gerry Faust bad old days.
Still, you have to be proud of what ND did in the fourth quarter yesterday. They showed a lot of drive and determination against a better opponent. Notre Dame takes on Boston College at South Bend next Saturday.
Posted by The Omnipotent Q at 11:22 AM

congrats on the Vikings

Thanks so much, Rick!