I've Seen This Movie Before 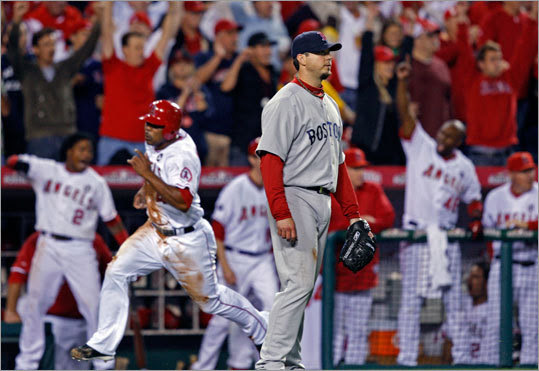 Well, here we go again. The Red Sox are in yet another 0-2 hole in the ALDS, with no wiggle room for error. Jered Weaver shut the Red Sox down, 4-1, and in two playoff games, the Red Sox have exactly one run in eighteeen innings.

Not the best time for a collective team batting slump.
You have to take your hat off to the Angels pitching. It's been quite effective and efficient. Josh beckett pitched six solid innings, allowing one run in that time span. But he ran out of gas in the seventh, and with another run in and two on, I thought for sure Terry Francona would pull him for Billy Wagner with left-hand hitting Erick Aybar coming up.
But in a move that will be rehashed incessantly, he left Beckett in and he gave up a triple to Aybar, and it was 4-1. The game was over at that point. The Sox got two on in the ninth with two out, but Mike Lowell's fly ball but the Red Sox behind the eight-ball once again.
The question now remains: do the Sox have the lumber to get back in this series? The AWOL bats have to wake up, or the long cold winter will arrive on Sunday night.
Remember that the Red Sox are one of just four AL teams to come from 0-2 down in the ALDS and win, and they've done it twice: 1999 against the Indians, and 2003 against the Athletics.
And of course, they've had other great postseason comebacks, like in 1986 and 2007. And the most famous of them all, in 2004. All in the ALCS.
Yep, I've seen this movie before. We'll find out soon enough if it still has a happy ending.
Posted by The Omnipotent Q at 1:58 AM

we got them right where want them :)

I think we all know how that turned out.