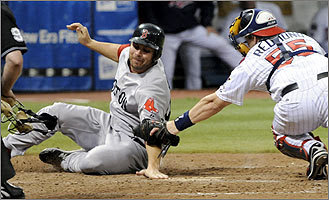 I missed yesterday's Red Sox afternoon finale in Minnesota, as I was helping my pal Chris move to his new apartment in Manhattan. (It must have been some sight, seeing me push a bassonette across Third Avenue.) I followed the game on my cell phone during some breaks, and was happy to see the Sox pull out a 3-1 win and split the series.

What I didn't know was all the hubbub that occurred in the seventh inning. Dustin Pedroia hit a sacrifice fly to right to drive in Jeff Bailey (pictured), but the replays showed that Mike Redmond got the tag on him just as Bailey was touching the plate. The Twins went bananas, and Redmond and manager Ron Gardenhire were kicked out for their trouble.

Jason Varitek hit his second of his two homers in that inning, and that made it 2-1. He now has 10 on the season, and had just 13 all of last season. In the bottom of the seventh, a close pitch set off Tek, as he got into it with Triple A ump Todd Tichenor, and he tossed Varitek, as well as Terry Francona, who gave him a piece of his mind as well. It was unusual to see Tek turn and argue with an ump over a ball call, so he had to be pretty passionate about the way he felt Josh Beckett was getting squeezed.

Beckett was very good yesterday, going seven innings, allowing just a Joe Crede home run and three hits, walked four and struck out eight. He's now 5-2. Jonathan Papelbon allowed just a single in the ninth before getting his 13th save.

The Sox now go to Toronto to face the free-falling Blue Jays, who have now lost nine straight. Tim Wakefield gets the ball tonight.
Posted by The Omnipotent Q at 11:31 AM

What's happening with Tek is, by far, the best story of the year. And desperately needed, what with Papi's problems.

it's been a nice story, especially since so many were down on him after last season...