A Black Void at Position Six 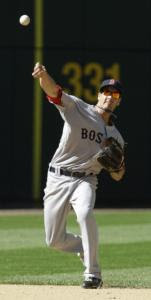 Justin Masterson pitched what will probably be his final start yesterday, and did a good job, allowing just two runs in 6+ innings, but Nick Green's error in the ninth (pictured) opened the door to the Seattle Mariners taking the final game of the road trip, 3-2.

Green made it with two outs and none on, and after an intentional walk, Ramon Ramirez gave up a single to Franklin Gutierrez, and that was it. Green has done a nice job for the Sox, especially at the plate. But his defense leaves a bit to be desired, and he's not an everyday player. Combined with Julio Lugo, the shortstop position has made 11 errors, the most in the majors. They really miss Jed Lowrie.

But the defense wasn't the only culprit yesterday, as the Red Sox squandered opportunity after opportunity. They banged into three double plays, with Mike Lowell doing it twice. They had the bases loaded with no outs in the fifth, and came away with nothing.

Good pitching, no clutch hitting and an error costs you a game against a clearly inferior team.

It was the type of game that makes you bang your head against the wall. And for Boston fans it would get worse in the evening, as the Celtics were soundly beat by Orlando at home in Game 7 of the NBA playoffs.

For the Red Sox, they now return home after a 2-4 trip out west, their last trip out there. I love the fact they get the long western trips out of the way by mid-May. They spend the remainder of the regular season in the Eastern and Central time zones.

And the news gest better, personnel-wise. They get Kevin Youkilis back on Wednesday, David Ortiz should be back from his exile tomorrow, and Daisuke Matsuzaka will return against the Mets this weekend.
Posted by The Omnipotent Q at 12:07 PM