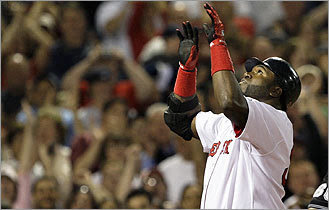 The monkey the size of King Kong is finally off the back of one David Ortiz.

The night got off to a slow start for him, as he weakly grounded to first and looked bad striking out the next time. But finally, off rookie Brett Cecil, Papi hit one into the camera well in dead center for his first home run since September 22, 2008, on his 150th at-bat of this season.

The crowd was behind Papi all night, but they went nuts when he finally blasted one out and he took a curtain call from the faithful. He later struck out again looking but also added a double late in the game.

OK Papi, the monkey's gone. Now it's time to get hot.

The Sox blasted five home runs tonight, four in the fifth inning off Cecil, as they romped to a 8-3 win. Jason Varitek hit two, while Jason Bay and Mike Lowell also connected in the fifth when the Sox got six. Bay's blast landed in the parking lot across Lansdowne Street. Kevin Youkilis made a successful return from the DL, as he had three hits.

Brad Penny pitched 6 2/3 strong innings in getting the win, and history was made in the outfield, as Jacoby Ellsbury made 12 putouts in center. He broke the Red Sox record of 10, and tied the overall record on the final out of the game. The MLB record had been held by two players, most recently by the late Lyman Bostock in 1977.
Posted by The Omnipotent Q at 10:22 PM

The long national nightmare is over.