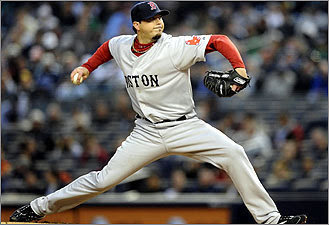 No better feeling than this.

The Red Sox have now taken the first five games from the Yankees to start a season for the first time since 1985, and for only the third time in their history (the other being the championship season of 1912 when they won the first 14 straight).

They jumped all over Joba Chamberlain in the first, as the first five batters all reached, with the first four scoring, three on red smoking hot Jason Bay's three-run bomb to left. (And Chamberlain hit Bay in the fifth with a pitch, after he was mowing all the Sox down in the middle innings. It was no accident, and the Red Sox know that. And Chamberlain will pay for that down the road.)

The Slob Punk Headhunter settled down after that, struck out 12 in the 5 2/3 innings he pitched. (I love the fact that the YES jackasses made him their "Player of the Game." Just like the Yankee bullpen was their Player of the Game in the first Red Sox-Yankees game, the one that ended with Youk's slam.) But it was too little, and too late, as all the Yankees could manage was a three-run homer by Judas off Josh Beckett that cut the lead to 4-3 in the third. They had a golden opportunity in the sixth, as the MFY had runners at second and third with one out, but Beckett retired Ramiro Pena and Jose Molina to end their final threat of the night.

Kevin Youkilis did not play because of an oblique injury he suffered on Monday night, and Jacoby Ellsbury left during the fourth inning with a tight hamstring. Neither is considered serious, and both are day-to-day.

Beckett wasn't tremendous, as the Yankees had men on base all night. But he gutted it out, and Hideki Okajima and Takashi Saito pitched three lights out innings to wrap up a 7-3 whitewashing of the two-game series in The House That George Built Because He Needed Luxury Boxes and Won't Permit Fans to Re-Enter Even If They Have Real Tickets and Thought The Game Was Called Off in the Scenic South Bronx.

The Red Sox went 5-4 on the road trip, and have won 15 of the last 19. Think about that. They are winning without Daisuke Matsuzaka, David Ortiz who hasn't hit a home run yet, and have a subpar Josh Beckett and Jon Lester so far.

The bullpen has been masterful, Jason Bay and Mike Lowell have been monsters, and Tim Wakefield and Justin Masterson have picked up the slack and held the rotation together.

The Red Sox are a team. And the best is yet to come.
Posted by The Omnipotent Q at 11:23 AM