They Left Their Bats in Chicago 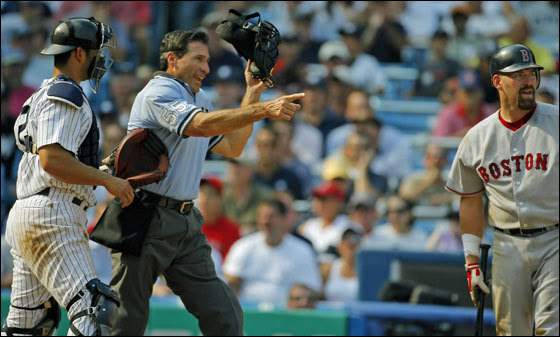 It was simply a terrible effort by the Red Sox offense today. They had the look of a tired, worn-out team the last two games. It was simply a bad effort today as they lost 5-0. Chien-Ming Wang pitched a good game for the Yankees, and didn't give up a hit until the 7th inning. For the second straight game the Sox struggled mightily not just to get on the scoreboard (they didn't today) but just get in the hit column. They were just completing a 10-game road trip and are returning to Fenway tomorrow. But it had the look like they were mailing it in today.

After bashing the living hell out of an awful Chicago White Sox pitching staff, it looks like the offense couldn't wait to get home and just skipped New York. (They scored 46 in 4 games last weekend, but just 6 in this series.) This series just had a weird feel to it. My buddy Chris pointed out that this is like the polar opposite of 1999, when the Red Sox were trying to catch the Yankees, and swept them in a September series. (You may remember that 17-strikeout game pitched by Pedro Martinez, which was simply one of the best games I've ever witnessed.) The Red Sox couldn't catch them in the end, and settled for the Wild Card.

Before the 10-game road trip started, I hoped that the Red Sox could go 6-4. They did exactly that, and gained one game on the Yankees. (They were 4 up when it began, and are now 5 up.) They got off to that great 6-1 start, but the bats just went to sleep in New York. And, for crying out loud, when is J. D. Drew going to get a hit that matters? The guy looks totally lost at the plate now. He came up in a few big situations this series and did absolutely nothing. He killed the rally in the seventh when he hit into the controversial DP at third. He's looking more and more like the worst free agent signing in Red Sox history.

Thankfully, September 1 is just two days away and the Sox can call up reinforcements from Pawtucket. I would expect to see Jacoby Ellsbury, Brandon Moss and Clay Buchholz very shortly, to pump some much need life into this club. The last few days were really so painful to watch (and I saw it all). No clutch hitting, too many swings at pitches outside of the zone. Simply brutal.

I can only hope that this sweep is a wakeup call for the Red Sox. It will wake them up to the fact that they can't simply coast into the playoffs. They have to catch fire and enter the postseason with some momentum. Staggering into the playoffs or coasting in could set them up for a first-round loss. So perhaps this sweep has a bright side to it. We'll soon see.

Today's game will be remembered for one reason. Joba Chamberlain, the Yankee wunderkind pitcher, suddenly got a bout of "wildness" in the ninth inning with Kevin Youkilis at the plate. He threw a 98 MPH fastball that was heading for his head, but he ducked out of the way and pitch sailed to the backstop. OK, that happens. But then he did the same thing on the very next pitch, in the very same place. Home plate ump Angel Hernandez tossed him out (pictured), as he believed he was throwing at him (and it cost him a shot at his first MLB save). The Yankees screamed in protest, and Chamberlain said after the game that he was just trying to get "a swinging strike." Whatever.

If he wasn't throwing at Youk, you have to wonder is there isn't something wrong with him. In the games I've seen him pitch, I've never seen Chamberlain do that, and on two straight pitches. (I also wonder if this may have had something to do with Youk reaching on Jeter's error in the 7th, avoiding Jason Giambi's tag, and then the fact he tried to avoid Rodriguez' tag later in the inning, and went out of the baseline.) Terry Francona after the game said “If that young man is trying to get our attention, he did a good job.”

He'd better be careful when his team gets to Fenway on September 14. He got the Red Sox' attention in the ninth, and I don't think they are going to forget it.

Especially Kevin Youkilis.
Posted by The Omnipotent Q at 5:56 PM