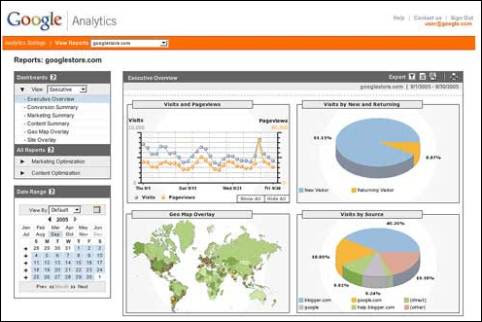 Back in February, my friend Chris introduced me to a new free service provided by Google called "Google Analytics." What it is basically is a detailed breakdown of those people who visit your web site: where they are from, how often they visit and what parts of your site they go to.

I love Site Meter and what it does, but Google Analytics does goes beyond what they can do. I first installed Google Analytics on my site in early February, and last night I realized it had been exactly six months since I did. So I went back to see the stats over that period of time.

They were to say the least fascinating.

I've had a total of just over 27,100 hits on my site the last six months. just under 19,000 of them were unique hits (in other words, individual people, not counting the same people twice or more). 43.6% of all people who visited my site were referred here (mostly by links of all kinds), 36.2% found me through search engines, and 20.2% came here directly. Just over one-third of all people who come to my site find me through Google.

My blog has been seen in every continent, and in most major countries of the world. (I found only one major nation in Europe it has not been seen in: Belarus, and just one major nation in South America: Paraguay.) Going back to when I first put up my Site Meter last year, there are still three countries that have never popped up on either: Cuba, North Korea and Afghanistan. I've seen Iraq, Jordan, Syria, and almost all of the Middle Eastern hotspots pop up at one time or another. I also seen places like Mongolia, Siberia, Togo, Fiji, Tahiti, and other really off-the-beaten-track spots register. Ivory Coast in Africa was just outside the Top 10, and I think I may know why. (It may have something to do with those goofy spam "you've just won an Internet lottery" emails I get about a dozen times a day.)

As far as the USA goes, Massachusetts, with over 4200 viewers, is over all the number one state my blog is seen, and that's not hard to figure out. (Red Sox Nation!) The Top 10 is:

Not a surprise that both Maine and Connecticut turn up in the Top 10 also, and New Hampshire is just outside the list. (I also have many friends in those Top 10 states who check out the blog regularly.) The bottom five states (I guess where I am least popular) are:

I also checked on the top viewed posts on my site, and of course, "A Day in the Life of Doug Mirabelli" is by far and away number one. As I write this, 7,406 people have gone to that post directly in the last six months (and the number is even higher going back to when I posted it in July 2006). And whenever Doug does something significant, like last Thursday, my numbers jump. "The Nicest Guy in Baseball" is next, with 191. That gives you an idea of the Power of Doug! Here is the complete Top 10 viewed posts (excluding archive pages) over the past six months:

1. A Day in the Life of Doug Mirabelli
2. The Nicest Guy in Baseball
3. The Hardest Baseball Trivia Question
4. Even A-Rod's Wife Hates Yankee Fans
5. Brooklyn Dodgers: The Ghosts of Flatbush
6. Once an Idiot, Now a Moron
7. Finally a Name to This Guy
8. The Sopranos Finale
9. Tough Super Bowl Trivia Question
10. Trivia Q&A: May 7

Thanks to all of you, from near and far, who come to The Mighty Quinn Media Machine, and especially to my regular viewers. If you have a site, I would suggest adding Google Analytics to your template, as it will give you tons of fascinating info on your readers. Go to http://www.google.com/analytics for more information about the service, which is free.
Posted by The Omnipotent Q at 1:02 PM

Tell those slackers in Wyoming to get their asses over here.

Well, I don't know if they have Internet access in Antarctica, as they've never turned up on either Google Analytics or Site Meter. It would be EXTREMELY cool if they did...

I would guess there's no huge Red Sox Nation in Wyoming...