When Will This Insanity End? 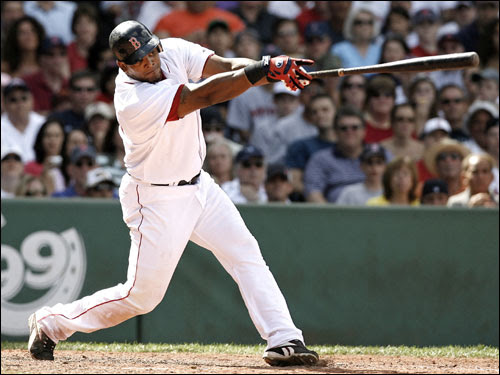 This is a direct appeal to Red Sox general manager Theo Epstein, and to anyone else who runs the Red Sox.

We simply can't take this any more. Please get rid of him. I took an informal poll of Sox fans at Professor Thom's last night, and it was nearly unanimous. Wily Mo's got to go, and we'll take a few used baseballs just to get him out of here.

Once again last night, he bombs out in the most clutch situations. Three times he came up with runners in scoring position, and he did absolutely nothing, leaving seven runners on base. The Red Sox were fortunate that Kevin Youkilis doubled in two to give them the lead in the seventh, and went on to win, 5-4. Pena has absolutely no clue about plate discipline. Throw him garbage out of the strike zone and he's flailing away. And he looks absolutely pathetic while doing it. The comparison to Pedro Cerrano in "Major League" is so close it's scary.

Everything I hear about Wily Mo is that he's a good guy, and works hard at his hitting, taking extra batting practice, and works a lot on hitting curves and sliders. He has David Ortiz as a big supporter. But let's face the facts. He's just not going to make it in Boston. For the sake of his own career, he's got to go to place like Kansas City or Pittsburgh and play every day to see if he has it to be a full time major leaguer.

And there's no shame in admitting the trade for Bronson Arroyo was a failure. Even the best GM in the business, John Schuerholz of the Braves, has made his share of clunker deals. And Arroyo's having a lousy year in Cincinnati this season anyway.

It's time to do what's best for the Red Sox. They have a weak bench right now. Alex Cora is a valuable utility man, but Eric Hinske hasn't hit much and Doug Mirabelli catches Tim Wakefield (and does little else). They need a fourth outfielder, someone like a Gabe Kapler, who can come in and play good defense and substitute for the three main outfielders every once in while and get a clutch hit or two. (Bobby Kielty was just released by Oakland, and would be a nice addition, even if he is left handed.)

Pena is simply killing this team every time he plays. He's wasting a valuable roster spot. He's NOT a fourth outfielder, and he's rotting on the bench with his infrequent play. It's a shame the trading deadline passed without moving him, but of course, a trade through waivers can still happen.

It's time to move him, Theo. Even if he has to be "designated for assignment," the Red Sox have to do what's best for the team. As well as keeping the fans' sanity too.
Posted by The Omnipotent Q at 12:41 PM

Maybe Omar will pick him up on Waivers(LOL)

So much for him being just Tim Wakefield's catcher...

WMP is to Hitting, What Benitez is to Clutch Pitching;

Now that the weather is hot & steamy, A-Rod cooled down;

Note that next Blog Article is #900, having surpassed Bonds in something.