Manny's No Longer a "Baby Bull" 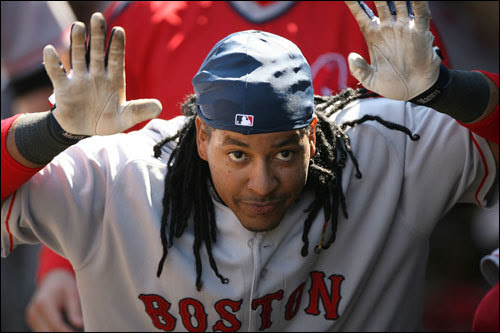 If you were watching yesterday's Red Sox win over the Mariners on NESN, you may have caught this. After Manny Ramirez blasted a home run to put the Sox up 3-0, he was seen in the dugout with David Ortiz and Julio Lugo and seemed to be up to the usual Manny tomfoolery you see him do. But this time, they seemed to be doing some kind of "el toro" routine, with Papi serving as a "bullfighter" to Manny acting like a "Raging Bull."

Some people say there's lots of bull going on in MLB dugouts. I guess the Red Sox showed that yesterday. Never a dull moment in the Red Sox dugout, especially with Manny around. It also reminded me of the nickname that Manny once had in Cleveland, "The Baby Bull." He seems to have lost the nickname somewhere down the road.

Thanks to my friend Jules, who alerted me to this photo from today's Boston Globe.
Posted by The Omnipotent Q at 12:17 PM

I love Manny in the dugout! He's a huge kid, just like me.

Manny is Awesome! And it helps hes getting hot at the right time!

Absolutely right, Bosoxbuzz. I hope we see Manny doing more celebrating in the dugout more often...Me too, Suldog, I guess I'm just a kid like Manny...in SOME ways.