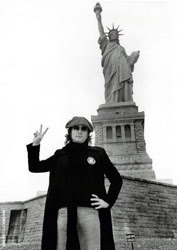 This is always a painful anniversary for me.

As many of you know, I am one of the bigger Beatles fan on this planet. I always have been and until my dying day, I always will be. Since my early youth, John Lennon had always been one of my personal idols. 26 years ago today, John Lennon was senselessly murdered in front of The Dakota apartment building.

On the night of December 8, 1980, I had one of those "Kennedy assassination" moments (you know, where you were and what you were doing when you heard the news) like most other people did. I was 18 at the time, and was watching the New England Patriots-Miami Dolphins Monday night football game. It got kind of dull early in the third quarter, so I turned it off and put the radio on. The first thing I heard on WNEW-FM 102.7, a NYC rock station at the time, was "More on the John Lennon shooting as details become available." What???

Then I heard the details of what happened, and about 15 minutes later, I will never forget hearing the words of DJ Vin Scelsa, his voice cracking with emotion, on WNEW: "John Lennon is dead."

I was shaken to my foundations. How in the world could this happen? I ran outside to my friend Richard's house, who lived up the block and was a big Beatles fan. I rang his doorbell and he had just heard the news too. We both wanted to go to the Dakota right away, but my dad talked me out of it and told me to wait until the next day. I stayed up all night that night, just listening to Beatles and John Lennon solo music on the radio. I was literally in a daze the entire night, not believing what had happened earlier that night.

I was a sophomore at Baruch College, but I skipped classes the next day and headed straight for the Dakota on West 72nd Street. There was a huge mob of people in front of the building, and a very large police presence as well. There were news crews everywhere, as well as sobbing fans in a state of shock. I stayed for a couple of hours, just talking to people and trying to come to grips with what had happened to John, as well as Yoko and Sean.

The next few days were simply a blur. How could one of the Beatles have been murdered? They had his killer in custody, and it was said that Mark Chapman was a deranged fan. (A sidebar on Chapman. He's in the safest place on earth for him right now: Attica State Prison in upstate New York. The day he gets out of prison, he's a dead man for sure. I heard that there's a Beatles fan in Michigan who writes to Chapman every month that on the day he walks out of jail, if he ever does, he'll be waiting for him with a gun outside the prison. Whether that will ever happen, who knows. But you just know that if Chapman ever does get out, some Beatles fan looking for revenge will try to make a name for themselves by taking him out. Chapman should really forget about applying for parole.)

On Sunday, December 14, there was a mass remembrance for John in Central Park. Radio stations at 2 PM that day played "Imagine" and thousands of fans braved the cold to be there. (I wasn't there, as it was just too cold and I had a terrible head cold and couldn't go.)

For many years, I would stop by Central Park West and West 72nd Street on every October 9 and December 8 to remember John. I'd look around the building, go into the park, and I'd see fans wearing Beatles shirts and playing Lennon songs on the guitar. Last year on the 25th anniversary, I was at the remembrance for John at Strawberry Fields. There were crowds there all day. When I was there, fans were gathered around the "Imagine" circle in the park, singing Beatles and Lennon songs. It was an eclectic group of people, of all races, nationalities and ages. (And of course, the usual nuts who think the CIA killed John were there as well.)

Now it's been 26 years since John was taken from us. I always prayed I would never have a more painful experience over someone's death than what happened to John (it was until a bright sunny September Tuesday morning in 2001). But today, we remember the man, his legacy and the music he made. His music live on long after all of us have left this world.

We miss you John.
Posted by The Omnipotent Q at 1:59 PM

Your post on your blog was touching too, Peter.

Yesterday was a difficult day for sure. Of course, I can't even imagine what it was like for everyone who was actually there when it happened...but it's still pretty painful all these years later. It's one of those things that you can never really understand, and thinking about how senseless and pointless it was only drives you crazy.
Great post.

Thank you for the kind and thoughtful words, Laura.

You say it's your birthday? It's my birthday too! Just repeating the 1968 Paul ords. You are the bst, and I' just to had out to a birthday dinner in West Hartford.....thanks for what you do....maybe we'll sign DMatt? But then? We won't know....stay well.....Peter, a big fan.

well you really really made me cry.