All Hail The Knights! 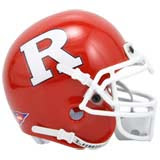 It was a great night to be a fan of the Rutgers Scarlet Knights, as they rolled over Kansas State, 37-10, in the Texas Bowl at Reliant Stadium in Houston. I believe my cousin Michael, a dedicated Rutgers alum, was at the game, and Rutgers won their very first bowl game in their school's 137-year history.

The game was barely a contest, as Rutgers scored two quick TDs in the first quarter, both passes to Tim Brown. Kansas State scored 10 points in the second, but Rutgers opened the second half with a TD brought back by Quintero Frierson 27 yards on the first play from scrimmage.

It was a big night for sophomore running back Ray Rice, who scored the final TD and rushed for 170 yards on 24 carries. QB Mike Teel, also a spohomore, was 16-for-28 with 2 TDs. The Scarlet Knights had nearly 500 total yards in demolishing Kansas State.

Rutgers ends one of the best seasons in school history at 11-2, including the bowl win. My congratulations to all the Rutgers alumni who suffered through all those bad seasons, and now they have a winning team to be proud of, and one that only looks to get better next season.
Posted by The Omnipotent Q at 6:13 PM