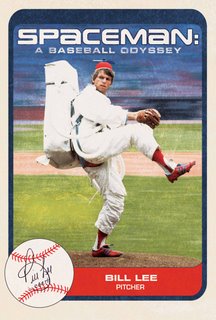 Last night was quite the special night at Professor Thom's, as we were graced by the presence of Bill Lee, the former Red Sox pitcher better known as "The Spaceman."

After meeting him, I can state without reservation that every stereotype I've ever heard about Bill Lee is absolutely true.

Bill was "fashionably late" for the 7 PM start of the DVD showing of "Spaceman: A Baseball Odyssey," as he walked in at just before 8 PM with his wife. There was a good crowd at the bar, made up of many of my Red Sox friends I watch the games with, a few of the BLOHARDS members I know, and some people who had heard that the Spaceman would be here for the viewing.

The crowd really enjoyed the film, and afterwards, the filmmakers, Brett Rapkin and Josh Dixon, took questions from them. But just before that, we surprised Bill by giving him a 60th birthday cake, which he really seemed to enjoy. After the crowd sang "Happy Birthday" to him, he told the famous story of former Red Sox and Yankees pitcher Sparky Lyle and what he once did to a birthday cake (it involved his bare butt). The crowd got a good laugh out of it.

Bill seemed to enjoy the whole night, as he was signing autographs on the DVD, baseballs and anything else the fans brought up to him. There were also raffles of Spaceman-autographed items, and that money raised went to charity. (He signed my DVD: "Bill Lee, Earth, 2006.") He gleefully posed for pictures, including one with me (which I REALLY hope comes out). He was enjoying his adult beverages and was holding court all night, telling war stories about anything and everything. Towards the end of the night, the took the mic and chatted with the fans and thanked them for having the evening for him. He talked about what baseball meant to him, former owner Haywood Sullivan, the film, among many other things. (He talked about the Red Sox and used the term "we" in discussing them, so he clearly follows them as closely as all of us fans do.)

The capper of the night for me was when myself and a number of my good friends from our Riviera days got together and posed for some photos with Bill. It was so much fun, especially when we all posed for one special picture of all of us showing the world what we think of Yankee fans (you can just guess what we did).

My buddy Chris organized the whole thing and did a fabulous job in making the night a great success. Everyone enjoyed meeting the Spaceman, and I'm glad to have seen so many Red Sox fans in the area come out for it.

We couldn't have the Bill Lee Trivia last night due to the crowd size, so we decided to have another special Wednesday edition of Trivia Night tonight. I hope you can turn out for it.
Posted by The Omnipotent Q at 12:15 PM

I so wish I lived in NYC! Sounds like a spectacular night--with a most capitivating guest of honor..

Thanks for sharing..Hope you are well..

It was such a great night, Christine. I'm sure you would have enjoyed it. Thanks for the kind words as always.