The News Gets Worse And Worse 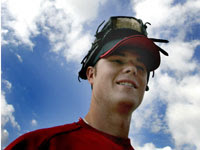 Red Sox Nation held its collective breath last night as Jonathan Papelbon, after throwing a pitch to Lyle Overbay, grabbed his right shoulder and had to leave the game, which Mike Timlin came on and saved, 2-1. Kyle Snyder pitched seven shutout innings for the win, and struck out eight. Papelbon will have an MRI done on Monday, and the best case scenario is that he may miss from 5-7 days with a shoulder strain.

Worst case scenario? I don't want to even consider that.

Curt Schilling will now miss his scheduled start on Monday due to a muscle strain in his right side suffered in his last start this past Wednesday in Oakland. He figures to be back on Saturday, which would be his next regular start against Kansas City.

At this rate, it seems like the batboys will be pitching before this season ends.

But the worst news of all from Friday was the news that Jon Lester (pictured) has a form of non-Hodgkins lymphoma. It is treatable, and he will begin his treatments next week. It is our hope that we will see Jon back on the mound at Fenway Park in 2007. Our thoughts are with him and his family in this very difficult time for them. He's a part of Red Sox Nation, and that means he's family.

Get well soon, Jon. You're in all of our prayers.
Posted by The Omnipotent Q at 1:04 PM