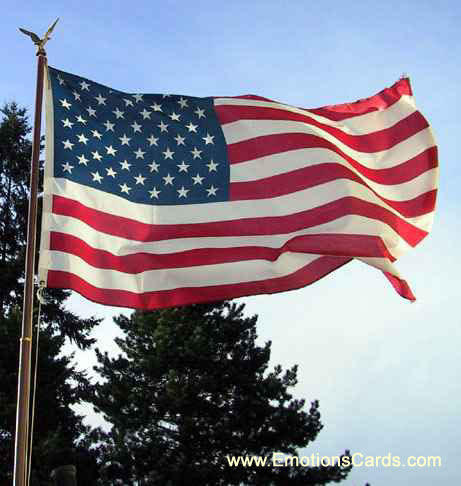 We're getting to that time again, the fifth anniversary of the worst day in our country's history. Right after we were attacked, American flags appeared everywhere. But soon enough, they started going back into storage. It's time to get them back out, to remember those brave heroes who gave their lives on that terrible day, as well as for those soldiers fighting to protect us abroad.

I received this email yesterday:

On Monday, September 11th, 2006, an American flag should be
displayed outside every home, apartment, office, and store in the United States. Every individual should make it their duty to display an American flag on this fifth anniversary of our country's worst tragedy. We do this in honor of those who lost their lives on 9/11, their families, friends and loved ones who continue to endure the pain, and those who today are fighting at home and abroad to preserve our cherished freedoms.

In the days, weeks and months following 9/11, our country was bathed
in American flags as citizens mourned the incredible losses and stood
shoulder-to-shoulder against terrorism. Sadly, those flags have all but
disappeared. Our patriotism pulled us through some tough times and it
shouldn't take another attack to galvanize us in solidarity. Our
American flag is the fabric of our country and together we can prevail
over terrorism of all kinds.

Fly an American flag of any size on 9/11. Honestly, Americans
should fly the flag year-round, but if you don't, then at least make it
a priority on this day.

Askinstoo said...
This comment has been removed by a blog administrator.
5:52 PM