Back In Second As Schill Goes Out On Top 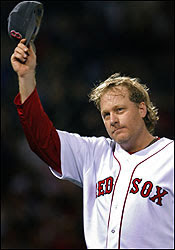 Curt Schilling pitched seven strong innings last night, and David Ortiz belted his AL-leading 54th home run to give the Red Sox a 5-1 victory at Fenway Park over Tampa Bay. This will probably have been Curt's last appearance this season, as it doesn't look like he will make the final start of the year on Sunday.

Schill came out for the eighth, after giving up 6 hits and striking out 9 and allowing one run in seven innings. But in a classy move, Terry Francona came out and pulled him out of the game to allow the fans to give Curt a well-earned standing ovation.

The Red Sox are back in second after the Blue Jays were beaten in Detroit by the Tigers. I did have a rather frightening thought last night. The Red Sox may just have to keep winning in order to finish in second place. When the Blue Jays finish their series in Detroit tomorrow, they finish their season this weekend against the Yankees in the Bronx.

Does that mean we have to actually root for the Yankees to win this weekend in order for the Sox to finish second? If the Red Sox keep winning, it won't matter. But rooting for the Yankees?

Let's hope it doesn't come down to that.
Posted by The Omnipotent Q at 11:05 AM

I think I'd rather finish 3rd than root for the Yankees

I'm with you, Welshsox fan!

I cheer for 2 teams: The Sox and whoever is playing the Yankees...;-D