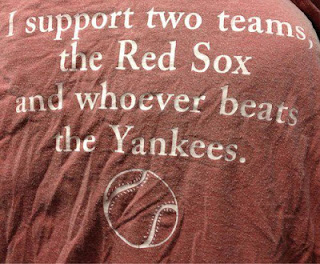 Yes, it's Yankee Elimination Day, as the Bronx Bombers were swept out of the ALCS by the Detroit Tigers, 8-1.

It was the first time New York has been swept in a postseason series since 1980, and in four games since 1976. The Yankee bats were nonexistent, as they scored six runs in four games and their best pitcher, C.C. Sabathia, got his head handed to him, giving up 5 earned runs in 3 2/3 innings.

Out of a possible 39 innings in this series, the Yankees scored in only 3 of them.

Does this make up for the absolute crapshow of a Red Sox season? Nope.

The New York papers will crucify the Yankees in the papers tomorrow, and Mike Francesa, who I avoid like the plague on WFAN, should be interesting listening on Friday afternoon.

Yesterday, there were some in the media who were talking about the Yankees coming back from being down 0-3, but it was pretty half-hearted at best. Most Yankee fans knew their team was toast. (And the 2004 Red Sox were, of course, in that conversation. The gift that keeps on giving.)

And Yankee Elimination Day 2012 occurs on the 8th anniversary of David Ortiz' 14th inning single that won Game 5 of the 2004 ALCS.