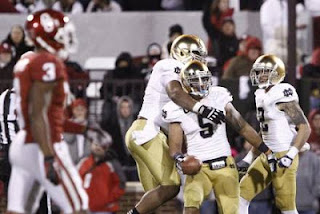 Something really special is happening in South Bend, Indiana.

Notre Dame was 12-point underdog going into the Saturday night clash with Oklahoma at Norman. It was also a night when the remote control getting a serious workout, with the World Series Game 3 on at the same time.

Oklahoma kicked a field goal early in the first quarter, and that would be their only lead of the night.

Cierre Wood broke off a 62-yard TD run late in the first quarter put Notre Dame up 7-3, and two field goals in the second made it 10-6 at the half.

Notre Dame's tough defense held Oklahoma, who was averaging over 44 points game in 2012 coming in, to two field goals going into the fourth quarter. It was 13-6 when Blake Bell ran in from one yard to tie the score at 13. It was also the first rushing TD the Irish have allowed all season.

ND then got the ball and drove 13 plays down the field, with Everett Golson running in from one yard to put the Irish back on top. Then the defense took over again, and an interception by Manti Te'o (pictured) effectively ended the night for Oklahoma, as ND added a field goal, and taking over on downs with two minutes to play, Theo Riddick ran in from 15 yards to end the night at 30-13. Notre Dame has now beaten Oklahoma in 9 of their 10 meetings all-time.

Notre Dame has four games left in this amazing season, with Pittsburgh up next at South Bend on Saturday. Then it's away to Boston College, back to South Bend against Wake Forest, and the season finale in LA against USC.