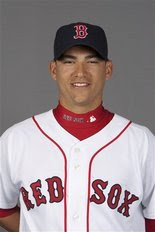 I was only able to watch the first two innings of the nationally televised Red Sox-Twins game on Fox, as a two-hour rain delay (what, again?) forced Fox to show the end of Rays-Orioles and leave when that was completed, due to "contractual obligations."

Anyway, Clay Buchholz pitched five scoreless innings, and the bullpen was splendid the rest of the way, as the Red Sox shut out Minnesota, 4-0 and ended their three-game losing streak.

As I write this, rumors are abound that super-rookie shortstop Jose Iglesias is on his way to the Red Sox from Pawtucket. The 21-year-old defector from Cuba was hitting .253 for the PawSox with 4 RBI in 87 at-bats.

Could this have something to do with the fact Jed Lowrie's made three errors in the last two games? Is Iglesias really ready, and what does this mean for Marco Scutaro? Is he injured? Here's an article from Fire Brand of the American League about the young shortstop from earlier on Saturday.
Posted by The Omnipotent Q at 10:54 PM

Iglesias seemed okay yesterday- too early to tell... he was only in a few innings. We'll see. He didn't massively screw up. That's something.

I'm sure Iglesias will only see limited action as a backup SS and pinch-runner, Toosoxy. I think the Sox just want him to get a taste of the bigs before going back to AAA when Scutaro returns.